Street idols is the first Italian reality comic written and designed by young people for young people. The characters in this comic are young people aged 15 to 20 years. Er mischia, Zippo, Missi, Falco and others. They live in Italy’s capital, on the streets, in the suburbs and attending school. Everyone with his or her own experience and interaction with others all to form a unique story.

When and how was it created 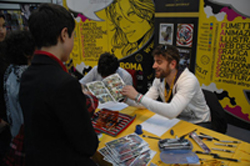 It’s created in Rome, in summer of 2012 during a meeting between Emanuele Merlino, a screenwriter, Simona Zarabia, an editor and Vicenzo Mercogliano a designer. The idea? To bring the adolesants to the forefront of the cultural debate, empomering them to become the protagonists of their own future and to create a positive message.

Not the usual comic

No super powers. No superheroes. Far from fantasy and the unreal, these youngsters constitute recognizable reality models. Young people with human weaknesses, who fall and rise. Reality comic, with a t-shirt and a pair of sneakers walking around the city, not around skyscrapers but in the suburbs, not fighting to save the Earth but committed to fight every day for their tomorrow.

An idea in common, a goal

Starting from a basic concept the authors sought new methods, activities and partnerships to realize their idea. The Street Idols along with the “International School of Comics” have hit their target.
The road, the young, the urban contest, the dreams and the passions are told with a typically youthful language. Here are the Street Idols, a product with brave intentions, illustrations that rock and with a strong educational message.

Useful not only in the social

“My story in 30 lines” is a section on the website dedicated to all those who want to make available their own lives and from which Emmanuel can be inspired to write the story and characters that will interact with the protagonists of the comic in the new releases.
The pencil of Vincenzo is also a way of training, innovation and inspiration for all students of the school and for those guys who approach the world of work.
Simona is engaged in production of Street Idols comic and, as the project manager, she manages the distribution in the stores and in events and conventions.