Graffiti as a means to save street kids from a difficult life. Not just a symbol of urban despair, graffiti can also make lives happier and brighter. It all depends on the goal. For Horda Esea artists, the goal is helping people get their lives back.

Horda Esea, the murals and hip-hop

The association is based in Soacha, an area situated in the South of Bogotà, Colombia. Where the reality is that poverty, violence and criminality plague the majority of the population, without descrimination for age. From Horda Esea founders point of view, graffiti and hip hop represent a positive alternative to a life of poverty and crime. That’s why, the association has become a ray of light in the difficult life of Soacha, creating gatherings of a healthy and sober form of fun for children all too often compelled to live a tragic life.The philosophical meanig behind the association Horda Esea is: horda means “army” and ese means “made of” and the A stands for “Art”. thus, Horda Esea means an “army of atrist” who openly oppose street violence, criminality and drug trafficking.

The idea behind Horda Esea materializes in a real building, “CasaSha” which currently hosts 20 students. During the week they attend regular sessions while on week ends they gather to learn different types of artistic expression. Sprays, brushes, coloured varnishes are only some of the techniques used by Casa Sha educators. A coloful and creative way to say no to the criminality and violence that pervades life in Soacha.

Since the 50’s, Soacha has undergone a progressive and radical transformation becoming a large industrial centre in constant expansion. In less than 30 years , Soacha has grown from 28.000 inhabitants to, in the 70’s, 390.000.
The lack of social infrastructure useful to cushion such an industrial and economic growth, led to certain inevitable consequences: overpopulation, exploitation, poverty and lack economic resorses just to name a few. 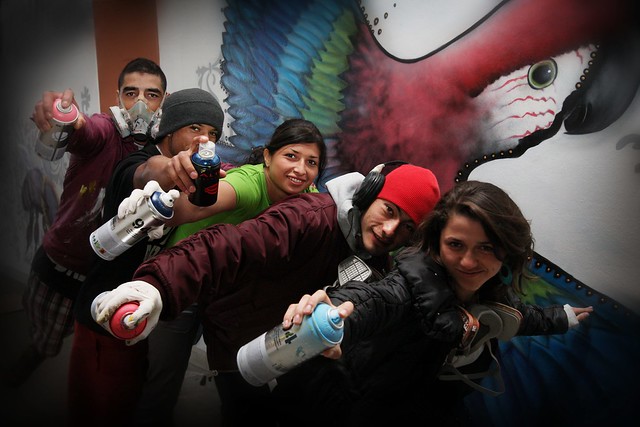