Uganda has been called one of the worst places on earth to be born, raised and be a child. In the South, children face the threat of poverty and disease. In the North, these threats are amplified by a brutal, mindless ethnic war inflicted by the Lord’s Resistance Army (L.R.A.) by which thuosands of families have been divided and millions have been displaced from their homes, this also led to the abduction and mutilation of tens of thousands of children resulting in the deterioration of identity and culture.
In 2006 a 27 years old b-boy, decided he wanted to do something. His name is Abramz Tekya. What he can do best is break dancing so why not to teach that to young people?

Now on every Monday and wednesday, at the Sharing Youth Center in Kampala, there is an invitation that goes out to children of all ages, ethnicities, religions and cultures to come and join in. In spite of all the hatred and divisions, here it’s possible to learn music, hip hop techniques and break dance acrobatics. We dance together, we laugh together and together we clap hands to keep tempo in a space far from the tensions of conflict: here we are safe and sound.

Abramz life has not been easy, both his parents died of AIDS when he was only 7 years old. He was shiped from one relative to the other, often missing school and passing time on the streets.Thanks to Hip-Hop and breakdance though he finally found a way to express himself, a way to pull himself out of poverty and depression and a way to help other cildren in his country. The BPU project started in Kampala but has now spead to other areas. Abramz’s dream continues: with the goal being to create a space that is permanent and free. like he himself says: “This is a place where people can regain their pride and where what is learned nobody could ever take”.

The BPU isn’t just dance:here they teach a vast array of professional activities that could one day become a means of liberating themselves from poverty. So we’ve created courses of Art, Design and Music, subjects that become very important for the kids, becouse often they become the first avenues in which they able to express themselves, kids from all over Uganda participate, completly free of charge, sometimes traveling tens of miles to take part.

Bouncing Cats, the movie about BPU

The amasing story of the BPU has also inspired a movie, “Bouncing Cats” which is the amazing story of one man’s attempt to create a better life for the children of Uganda using the unlikely tool of hip hop with a focus on b-boy culture.The movie tells the story of Abramz and Crazy Legs, an American breaker founder of the famous Rock Steady Crew and who has decided to support the project from the moment he heared about it. The movie tells how BPU is aimed at positively changing Ugandan society through the teaching of hip hop.

As Abramz says in the movie preview: “We all know we can make a difference, it doesn’t matter how”. What matters is doing it. 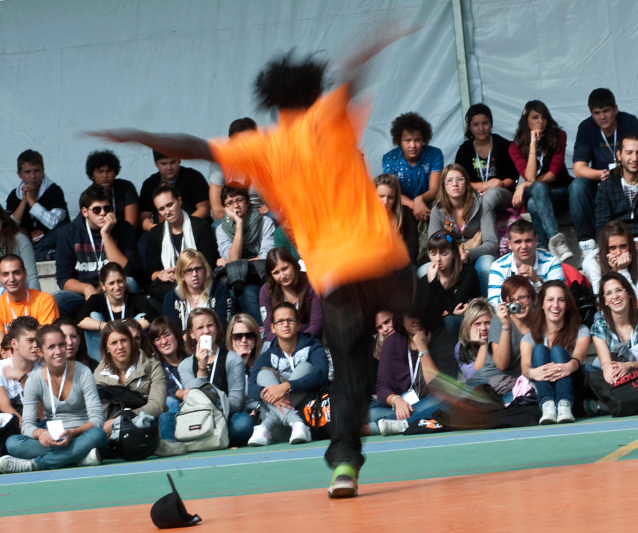