Debate, shows, unforgettable experiences. Here’s everything you need to know about to make you “day” like to other. Welcome to the WeFree world.

The “forum” area includes a round table (“Panel”), debates (“one-to-one”) and meetings with students (“Forumio”). The discussions will be based around current themes and will last roughly one hour. They will be structured to include as much interaction between panelists and the public as possible. The audience in the “panels” will be invite only, focusing on personalities from the public and private sector. It will also be integrated with groups of students from secondary schools.

Too often, young people don’t get the opportunity to express their doubts and opinions, to ask questions. “Forumio” features meetings between personalities from the world of sport and entertainment and a group of secondary school students. The meetings will take place in San Patrignano’s theater space in the afternoon.

Forumio 1 – Clarence Seedorf
Clarence Seedorf explains, “I always said I wanted to be visible and famous so I could help people that needed it all over the world”. He kept his promise. Once he became a world famous football player (the only one to have won four Champions League titles with three different teams) he founded Champions for Children, a non profit organization dedicated to helping children all over the globe, especially those affected by war, poverty and natural disasters.

Forumio 2 – Get Far Fargetta
Mario Fargetta is one of Italy’s most well known and successful Djs and has for years worked foro ne of the country’s most popular radio stations, “radio DeeJay”. In the last years he has concentrated on working in night clubs and among young people to promote awareness on drug and alcohol abuse, as well as sending a message that dancing can be “clean” fun.

“Theater” is an area dedicated to students, which will be able to watch two theatrical presentations featured in San Patrignano’s drug use prevention campaigns as well as a closing show at the end of the day which will recount the history of the shows and the young people involved in them.

Fughe da Fermi
This is the living diary of someone who, though words and songs, speaks of their real life experiences. The theatrical narrative structure takes us through references in literature, film and music where the audience becomes progressively more emotionally involved in the story as it goes forward. Stories are interspersed with scientific information on the physical, psychological and social damage done by drugs so as to be perfectly palatable and understandable to everyone. The show is presented by Pascal la Delfa, an actor specializing in theater, multimedia and language.

Ragazzi Permale
A cross between a talk show, theatrical presentation and investigative report, “Ragazzi Permale” is a presentation which addresses young people about the issues with which they struggle on a daily basis – outlining the profile of the kid who is apparently “fine” but who is nevertheless going through a trying time in life, however he may react. The stars of this show are young people aged 18-25 from San Patrignano who have overcome problems of addiction and can explain to their peers what brought them to use drugs as well as what helped them leave addiction behind. The presenter this time is Roman actor, writer and director Francesco Appoloni who has been working with San Patrignano since 2004.

We have decided to name the closing musical (and more) show of our event “Yes, WeFree”. This is the chance for everyone who participated in the day’s proceedings to sing, dance, draw, paint and express themselves, all together on one stage. The show will be hosted, as it was last year, by Red Ronnie, Italy’s most celebrated TV rock journalist. San Patrignano’s own team of WeFree kids will be on hand, as will the Community’s vocal group, the SanPa Singers. The latter will be accompanied by the famed Mozartini youth orchestra. On the scene we will also see drumming by Steve Ferraris, dancing by the Mondosole group and the Amico Charly street dancers as well as a performance by UK organization JumpStartMove. 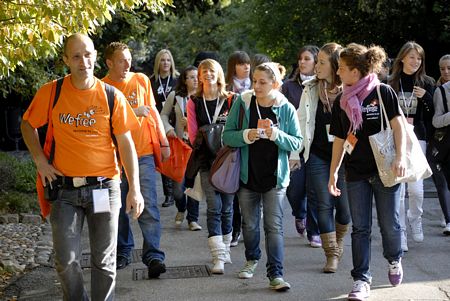