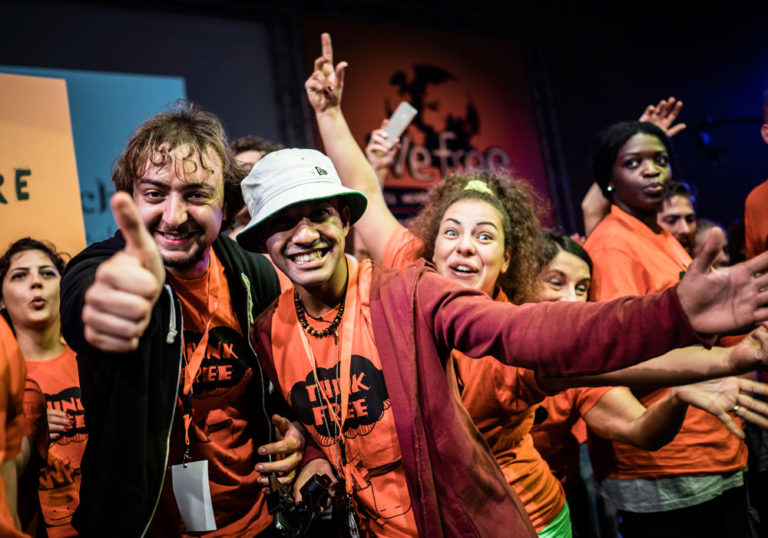 The DJ scratches the record and then lets it run, and with it Prince starts to dance. He is a break dancer, and his first move is called “the helicopter”, a classic. He spins wildly and the students, mouths wide open, start to cheer. He’s come a long way. I remember when I asked him to join our crew. He was a kid, a fourteen-year-old cast away. He used to dance next to the tracks of Rome’s terminal station

My name is Angela, and I am the founding member of Termini Underground. We are a crew of people from all over the world: Afghanistan, Rwanda, India, Russia, Albania, and Sudan. A few years ago we started training together, to get to know one another, to dance, to sing, to put on plays. They were boys and girls with sensational skills who would hide in the shadows of this huge train station because they didn’t have anywhere else to go, because they wanted to dance but they didn’t have anyone to dance with.

It’s crazy how I ended up here. At the time I was helping out a hip-hop choreographer for a show. I started hearing rumours that there was a very young Cuban ballerina who had been missing rehearsals, and that she had been found by another one of the dancers out of her mind on drugs at the train station. Then I got this phone call at 4am that woke me up. She was in a bad way and the kids needed help getting her home. I don’t know why but I didn’t think twice about it. I got dressed and headed out into the darkness that is that train station. That’s when I saw what it was like down there with my own eyes. There were kids and they were dancing and they were good, but you could see that they were high, twisted and tired, that they had come from who knows where, and only God knew where they were heading. At that moment I could have just turned around and gone back home, it would have been easier to have just minded my own business. But I didn’t.

What could I do to help? I wanted to do everything in my power to give them a way out. But I had nothing. I wasn’t rich or powerful, I wasn’t important. I was just a woman, a single mother who was trying to build some sort of future for her child. I knew how to dance though, I really knew how to dance, and theatre had always been a major passion for me. I had always felt at home when I was on stage. And I knew that if these things had helped me find direction in my life it could work for these kids too. So I stepped right to it. I opened up the doors to my world and let them in.

Termini Underground has been participating for years at WeFree Days. We send out some of the crew to teach some basic dance moves to the students that are there to enjoy the event, but also to meet and talk to them too, so that we can share a little bit of our life experience. A lot of the guys have come from very difficult backgrounds, and the fact that they have managed to overcome such diversity makes for a very powerful message.

Prince has been coming to WeFree Days for years. He has used dance as a weapon so that he could confront the harshness of his reality: “We didn’t have anywhere to go, we didn’t have any teachers. To be honest I felt like I was in a vacuum, there seemed to be nothing around us. Only city and silence. I went through some really difficult times. Everything just seemed rotten. Over time though I realized that everything I needed was inside of me. Dance isn’t just a passion for me. It’s another world. A magical world, a force that sprang forth from my soul and helped me face the world. One day I just decided that there would be no limits. I simply started dancing. I would dance anywhere, with anyone at any time. Even if my only audience were the commuters passing by, and the sound of the trains would drown out the music, I would just keep on dancing. Then one day Angela came along. She asked me to follow her, to believe in my dreams, because my dreams could change my life. I didn’t know anything about life but I was more than clear on what my dreams were. So I trusted her, I followed her and since that day everything has changed.”