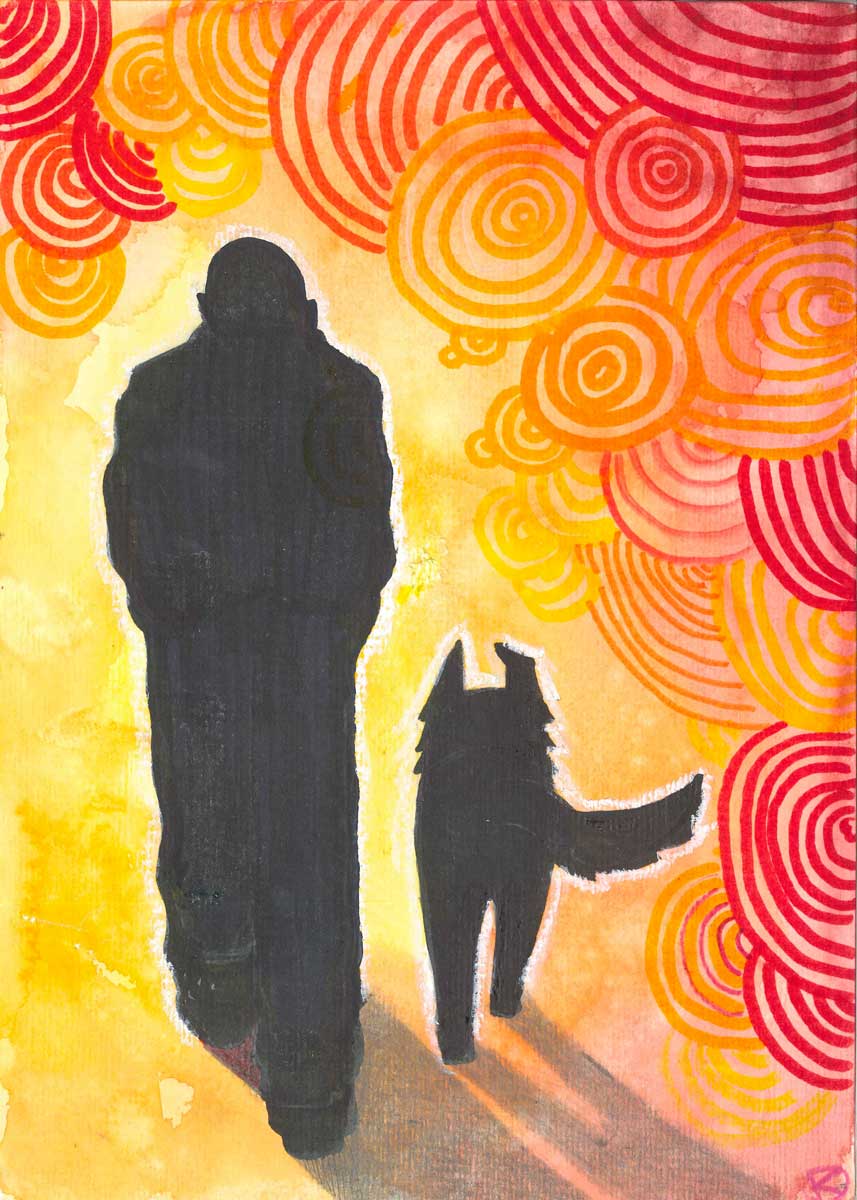 This is a story of a friendship shared between Ale and myself. Ale is a fantastic person who is currently in recovery, and completing the program at San Patrignano. You are probably asking yourself how anyone could have feelings for a junky. Well give me a chance to explain myself and perhaps you will understand.

Ale and I met thirteen years ago. As soon as I saw him I knew that there was something between us. It was as if we had been struck by lightning. We quickly became inseparable. We would take long winter walks at night through the city centre, under the famous arches of Bologna. Not a soul would stir, it seemed as if the cold night air was ours and only ours. We became whole. We would get home late and lie down in bed, exhausted and fall asleep next to each other. He would always say: “If my parents catch us we are going to get into so much trouble”. I know, dogs don’t usually get to sleep in bed. But Ale loved me too much, there isn’t anyone else like him in the whole world. In the end he would just give in and let me sleep with him, and I would wag my tail happily.

He would always talk about moving out of his parent’s house, that we would get a house just for the two of us and that everything would be different. And then it happened. We finally moved out and things did change. Things changed a lot, more for him though and not for me. He began to forget about me. When he was there he adored me, we would play and everything would be perfect. But then he would disappear and wouldn’t come home for days. Sometimes he would forget to feed me. He wasn’t a bad person. He had changed. He had started smoking heroin. Every time he would smoke that stuff he would become someone else.

He became really detached. He isolated himself. I knew that it was still Ale, but it was as if he was hiding his real self. I fully expected him to forget my birthday but for some reason he didn’t. He came home late with a present: my favourite cake. I started to jump around the room, wagging my tail like crazy and as soon as he set it down I dove right in. Then I realized that his dinner would be canned tuna and stale crackers and I felt so guilty. I wanted to give him half of my cake just to see him happy, so that he could celebrate with me. I watched him from under the table. I loved him so much. Seeing him like this made me feel terrible.

After a while the situation became unbearable. He wasn’t looking after himself anymore. I could see the guilt in his eyes every time he looked at me. Then one day he gathered up all my things and took me to his parent’s house. I couldn’t believe it. He chose heroin over me. He didn’t have enough money to look after me anymore because it all was going on his spiralling habit. When he handed the leash to his mother he couldn’t even look at me in the eyes. That moment right there made me hate heroin more than anything else in the world.

I got sick. I missed him terribly and his parents just didn’t know what to do with me. Sometimes I would dream that we were back together, playing in the park like we used to do. Then I would wake up and I would find myself alone in the kitchen with his mother and I would start crying again. I lived in that nightmare for a month. Then one day the front door opened and it was him. Ale had come home.

He was destroyed. He didn’t even have the strength to smile at me. He was bone thin. But the important thing was that he was back here with me. He was soon to enter San Patrignano and he needed to spend some time at home before they let him in. I was happy for him, for the first time in a long time. I was glad that he wanted to get well. I knew that the Ale that I once knew was still in there somewhere and that gave me peace. The others couldn’t see that but I knew he hadn’t changed. He had just hidden himself underneath all that silence.

In the meantime I got worse. My strength was leaving me. I stood by him but I knew that I wouldn’t be around for very long, and definitely wouldn’t be there to see him finish the program. But that wasn’t important. That small window of time before he left was one of the happiest moments of my life. It was like going back to the time when we first met, way back when we were inseparable. I was so happy that day, thirteen years ago, in that dark room, out of all my brothers and sisters he chose me. Now he’s there at San Patrignano and I know that I will never see him again but that’s ok. I’m happy anyway. I’m happy because I love him more than anything else in the world and I’ve always believed in him, all the way to my last breath. I’m Ira, and I am Ale’s dog.