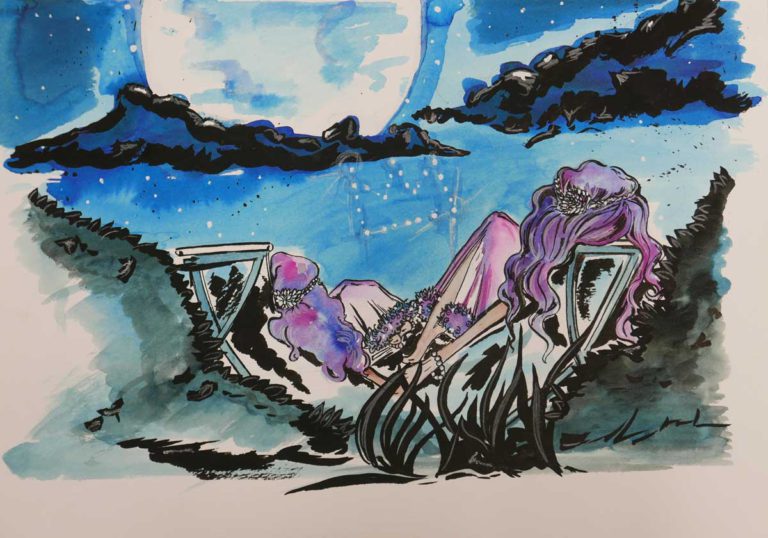 Since she was a child, Sara never played with dolls. She turned into a princess. She covered herself in veils and fabrics, and long trains that trailed behind her when she walked. She was in love with those beautiful dresses made from light cloth that billowed when she pirouetted, that flared into a wheel when she span

Whenever her mother bought her a dress she always asked: “Does is it make the wheel when I spin?” She loved colour, she was comfortable when she was around other people, well behaved, always lively, creative and fascinated by astrology. Every summer at night she would lay out under the night sky and gaze at the stars with her mother and sister. She grew up watching Disney: Cinderella, Beauty and The Beast, Sleeping Beauty, Snow White and The Little Mermaid. What she need most though, in order to complete the fairy tale, was her very own prince. But growing up she realized how different her dreams was from her reality, that the fantasy world that she had created for herself would remain just that, fantasy.

Reality was a huge disappointment; she suffered in the real world. The men she met were light years away from what a Prince Charming should be. There were no glass slippers, no flowers and kisses that broke spells. She tried being in a relationship, but the attention she got was never the kind of attention she wanted. Finally she gave up. She decided that she would never find her Prince Charming.

She retreated into her own fake plastic world, shutting herself off. Her warm heart turned colder. By day she worked in an office. Night time is when she came alive though. She would slide herself into a pair of sky high heels that made her skinny legs seem to go on forever and hide her real hair with brightly coloured wigs. No one really knew her. She didn’t like to stop and have a chat and when she did she would never give too much away. Whenever she walked into a bar she would turn heads, and this gave her all the confidence she needed. She was enchanting. She would take up position on the pole and she would dance the world around her would just disappear. She was perfect, a vision of beauty, a perfect body crowned by her perfect face.

But something inside her was broken. It was as if she hadn’t anything left to believe in. They all looked, they all stared, she knew it, they knew it, she loved the attention, but she wouldn’t ever have given these people a second glance. Every night, she would leave the stage and the music would stop, the lights would go out, and she would recede back into herself, leaving behind a shower of compliments and hopeful glances. She wasn’t even looking for Prince Charming anymore. All that remained was the music, the desire to dance and her long dresses that hung off the back of a chair in her room, just like the ones her mother would buy her when she was a child. When she was alone she would spin in the middle of her room, making them flare into a wheel. It was the only thing she had left of the dreams that she used to have.