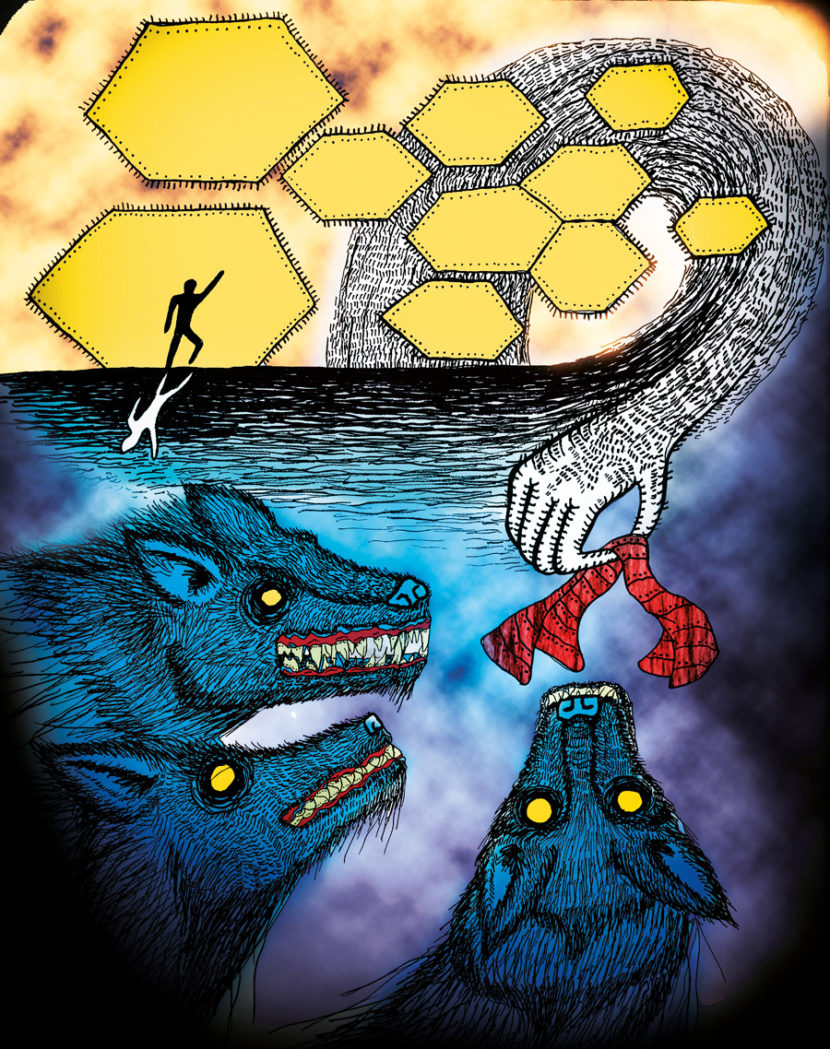 The outskirts of town are a strange place. They seem empty but if you look close enough you will be able to see some signs of life. Barracks, all in their rows, like a human hive, where all sorts of people live: the poor, pensioners, dealers, immigrants, rats, the working class, families and junkies.

We’re all there together, living amongst the rot and the human degradation, to which we all eventually become addicted.

I was born here, the son of two misunderstood artists. For better or worse, they are my parents and I had to learn to live with their hippy lifestyle and strange theories on society.

I practically grew up a savage, playing football with the boys from the neighbourhood and running wild.

I was never happy; I found it offensive to live in those conditions. I used to take the Metro, riding it all the way uptown, so that I could walk around and breathe in a little clean air. But these little excursions did nothing to curb the way I felt.

It was these feelings of isolation that pushed me into the arms of a local gang of Nazis, the Goth Red. I met them outside my block one day, in one of the connecting alleys that took you from the buildings into the fields. I quickly became one of the boys, going on “punitive missions” to beat up homeless kids that we caught begging. People that would have to light fires in barrels so that they could stay warm during those long, cold nights.

In a moment all the confusion I had in my head began to take shape. I thought of these people as superheroes, people that could see things for what they really were, the only people that were worth something, the only ones that were doing something about the situation that we found ourselves in.

I very quickly rose up the ranks, becoming a leader amongst men. The older boys knew how to exploit the hatred and anger I felt towards myself, making me effective in any situation.

We lost control when we were all together. We were strong. When situations got out of hand, the adrenaline, the violence, the blood and alcohol became our drugs.

We were hooked, more so than the junkies we were beating up, and we all thought to be way better than them when in fact we were much worse.

The violence wasn’t cutting it anymore, and as time went on our need for it escalated. We started to use amphetamines in order to heighten our experience, falling prey to the delusions of omnipotence. We always carried knives, always in fights with Gypsies, football hooligans and anyone else that would respond to our insults.

One day we bumped into Sahrji, a neighbour of mine. We had grown up together, playing football and watching cartoons. He was the son of two immigrants, people that had managed to fully integrate into our society. His mother looked after the house whilst his dad was a stonemason. He had two older brothers as well, neither of whom I had met. They had moved out years ago, both of them finding jobs in different cities.

He was shy. One day whilst we were listening to music he told me that he was gay. He was ashamed and he was terrified that his parents would find out. He was sure that they would kill him. It really wasn’t a problem for me, I loved him all the same because he was my friend and he understood me. He always listened.

That day though, I totally betrayed him. I wanted to look big in front of my friends so I told them his secret. They went after him like a pack of wolves, screaming insults, swinging kicks, hurling punches.

I could hear his screams. He was crying, begging them to stop. I just stood there, impassive, just watching them as they beat him to a pulp. There was a part of me that wanted to stop them but my mouth wouldn’t open. My body wouldn’t move. I was petrified.

He was basically unrecognizable by the time they finished with him. They all made an escape. I was right behind them. I was ashamed of myself and I knew that I would never be able to look at him in the eye again, knowing that if I did I wouldn’t see anything other than his contempt and disappointment. I felt like a traitor.

I stayed at home for days, refusing to go out. I know that his parents took him to the hospital, to fix him up. I wanted to go out and see him but I was too much of a coward. I couldn’t bring myself to apologize.

We don’t speak anymore. He doesn’t look at me when we pass each other at the entrance. He doesn’t say a word. It’s like I don’t exist. I stand there hoping that he will show me some sort of gesture of friendship.

I bare this huge weight on my conscience, and I bare it all alone. It’s suffocating me into not wanting to live anymore.

I wasted years hating the place where I was born and raised, feeling different from the people that I grew up with. I now realize that I’m terrible for thinking that I was any better.

I’m horrendous, just like these outskirts… I’m a piece of trash.