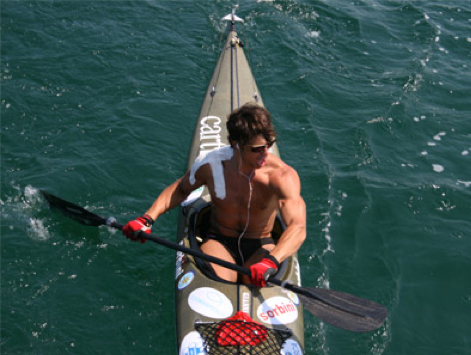 From Croatia to Italy crossing the sea with a kayak, a paddle and a limitless supply of energy. The route Rovigno-Pesaro by now can be called his own. It belongs to him permanently. Francesco Furiassi, in 2006, covered it all: 165 km non-stop in 22 hours and 4 minutes. For a total of 168.000 paddle strokes. A feat that sent him directly to the European Guinness records.

The young athlete was only 24. Today that he is 33 years old, what is he doing? Is he basking in his brilliant past? Or is he planning his next solitary challenge?

A few years ago Francesco decided to make his great passion for sport and travelling available to anyone. Together with other youngsters he made “Apri gli occhi senza freni” (Open your eyes with no limits). A documentary format that brought to the realization of a number of documentaries where sport isn’t the goal, but the way to tell and get closer in a different way to important topics such as environment or the co-habitation of different peoples.

The latest work by the team of “Apri gli occhi senza freni” is called “Run’d for freedom”: a story of rebirth, where the young protagonist Rand finds, among the ruins left by Isis in Iraqi Kurdistan, the strength to still hope in a different future.

Francesco Furiassi will be with us here at WeFree Days. A solitary hero, but also a good team player with whom to share the challenge that is most difficult of all. To be fulfilled by a full life, spent, never wasted.