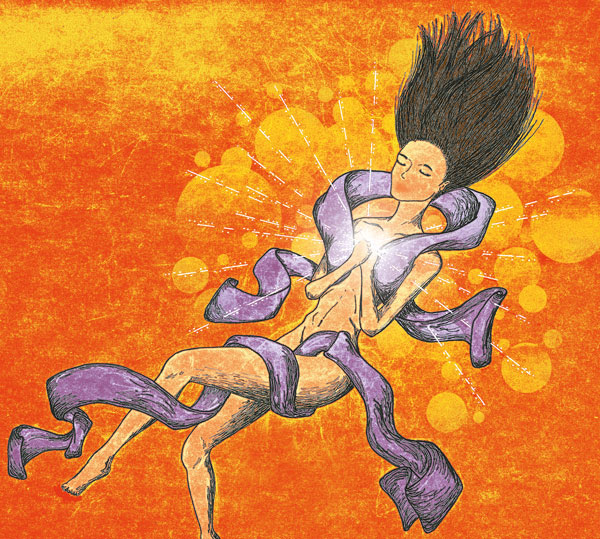 I sink my hands into the sand, I pick up a handful and I let it seep through my fingers. The sun is setting, red rays on light are reflected on the surface of the water and go through everything they meet, making me feel like one with nature.
This is the most familiar and waited-for moment of the day, I allow it for myself every day to take stock of what I do. It’s a moment to meditate and reflect and the sun is the judge and listener. It’s in those very moments that I feel a part of something special. Then, when even the last ray hides behing the line of the horizon and a shiver runs along my warm skin, comes the time to return to my life.
I get up and, walking barefoot on the sand, I try the latest dance step I made up and that I will present next weekend to the patrons of the bar I’ve been working at for a few months. Partnered dancing, latin-american. And the tango that I’ve always adored.
Only six months have gone by since I finished serving my time and I’ve returned to my daughter who lives with my mother.
I know, they are few, but to me they seem like a lifetime: the life of an ex-con is an upwards slope. Now I am hobbling on as I can and even if I don’t really like my job, I settle with it, for my little girl, hoping that one day, not too far off, we’ll be reunited.
I dance, that’s true, it’s been my dream ever since I was young, but I would have hoped for something better for sure.
I get my bike and as I do every night I go to work.
I left my family and my city when I was only 18. To be a dancer in Milan I went against everybody: my father who didn’t want anything to do with me and my mother who was distraught over my decision. I was stubborn and with the arrogance of my youth I thought I would be successful all on my own.
It wasn’t like that though, there was no happy ending like in the fairy tales.
Too sure of myself and helped along by my beauty that I always used as a free pass to get what I wanted, I started collecting an endless series of “come back another time” to every audition I went to. With no work Milan is a hard city, impossible to live in. So I did what I could: I was a waiter, a barmaid and one night in a bar where I was picking up glasses, I met an important man, a man with money. He took me with him.

I thought I had figured it out, in the end it wasn’t so bad: he wasn’t very handsome, but at least he was nice.
It didn’t last long. To him I was nothing more than a toy to be changed when he found a better one.
I became pregnant with Luna but he wanted nothing to do with it. I couldn’t take care of her so one night I gathered my courage and took her to my mom who took her.
From that moment I went from one man to the next, from one pull of coke to the next. I did it in order not to think, to forget every moment of my life. Because I loathed it, I loathed myself. Often I would think about my parents, their words, their advice. They had always been right, but I had never listened. And now I wasn’t able to go back.
I was arrested, I was at a private party, as always among men and coke. A lot of coke. Maybe that night destiny lent me a hand, maybe it was all written in the stars and maybe I had to go through all that pain before finding happiness. Today I can say that the “second chance” in life is a real thing and I am the proof.