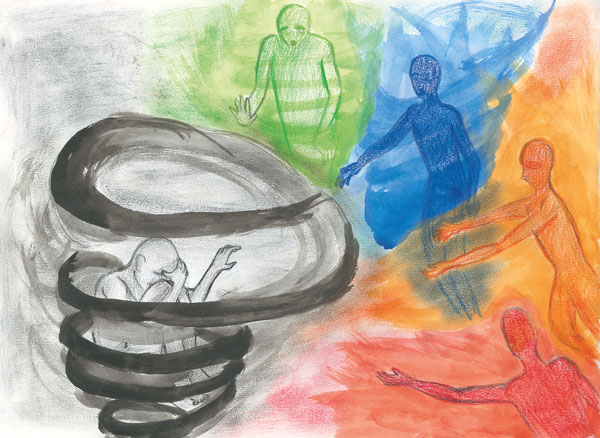 I don’t like it when they all gather round and talk behind other people’s backs. I find it irritating, stupid, it makes them airheads. I’m not like that and I refuse to join them just to not be isolated during break-time. I’d rather stay on my own with the boys, who in the end are so much better than all these little girls. I have nothing against them, on the contrary, I get along fine with some of them sometimes; but they can’t treat Laura like that, their prey. I hate to hear that they make fun of her. It could happen to any of us, but this year they targeted her. It’s unfair. Laura isn’t the most likeable girl in the world, I admit it, but it doesn’t mean she deserves total exclusion and the scorn of all the rest of the girls. We’ve been in the same classroom for four years, but I don’t know her well, we never really hung out together; she was once very good friends with those who today incite the whole class against her. I don’t know what happened between them. One day, in class, they started picking on Laura’s appearance. They made fun of her loudly, their goal was exactly to be heard by everyone. They talked about some of her physical flaws, blowing them out of proportion until they reached monstrousness. The boys heard, but had the decency to pretend not to notice. She was there, a few meters from them and heard everything; she was livid, but at the same time she had also given up. Her eyes were full of tears that she refused to release, they stayed there as if suspended in an endless tension. For a moment I put myself in her shoes. I couldn’t understand how someone could deserve such cruelness. I spoke up. “Hey Ale – I said to the leader, the one that had it in for Laura – you’re really a bitch, you know that?” The whole classroom froze. I had exposed myself too much. Why did I choose to speak out against her of all people?.. the most popular girl of the class, the head honcho… Silence, deafening silence. Fortunately the bell rings. The teacher arrives, closes the door and starts the math lesson. Shoot. In two seconds and with a determined sentence I had turned the balance of the classroom in its head. I couldn’t stop thinking that the worst was bound to happen, that everything was going to change, but I had made my decision, I couldn’t go back. I had to take it on, otherwise she would have won and I was going to be devoured by the whole pack. The bell rings, school has ended once more for the day. Ale stands from her chair; as she leaves she glares at me with a menacing gaze. I don’t let myself be intimidated. I gather my courage and I stop her. “Ale, it’s no use looking at me like that. What you were doing was wrong, and you know it” – “If you’re not on our side, you need to mind your own business.- she answers – “Why would I be on your side? To make fun of someone and make her feel bad? I’m not like that, I’m not like you. I don’t like making others suffer. I don’t think it’s right and I will never do it. Maybe now I should fear you, but you know what, I’m not scared at all, because the ones with a problem are you people. Next time you want to make fun of her remember there’s two of us.” She looks at me strangely, I can’t interpret her gaze… she looks confused. She doesn’t answer, she stays there, frozen. Maybe no one has ever stood up to her that way. I take the first step, I walk away. I get to the moped parking lot, Laura is still there along with a good part of our class. She’s crying, the others are watching. Why is no one doing anything? … I cross the parking lot, I head straight for her. “Laura… would you like to go somewhere this afternoon?” She meets my gaze. “Thank you for before, but you shouldn’t have… “ – “No Laura… I did have to, everyone had to” She lowers her head, thinking. Silence. “Ok, to go somewhere. At what time?”