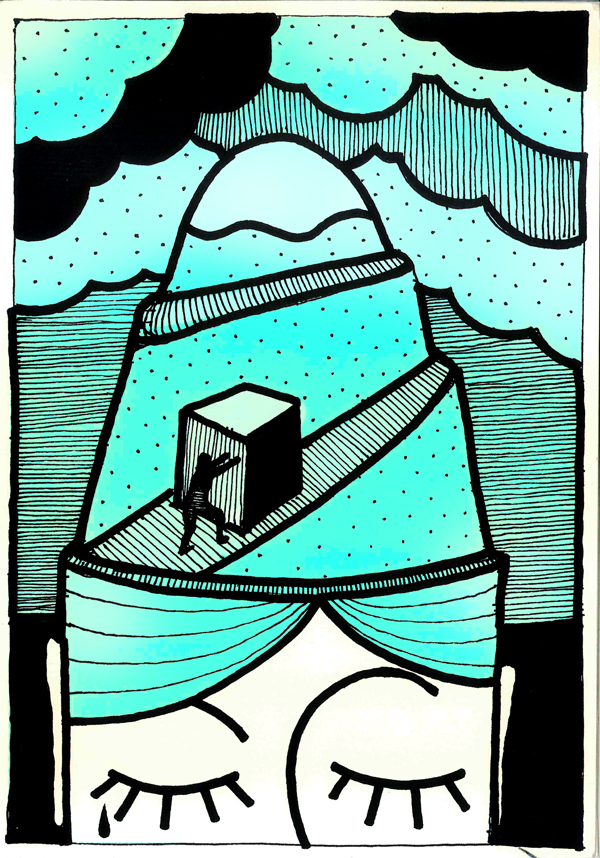 Every night that damn dream came to the door of my mind. I was in a marble quarry; I was pushing a granite boulder doing a tremendous effort.
I tried to move it, but there was nothing I could do, nothing. I could not. Despite all possible attempts, that boulder remained there, firmly in place.
Every morning, as I woke up, I could never remembered the place I was in, not even a detail of the environment around.
The way I saw myself was blurry too, every time, all that remained was a sense of heaviness and disappointment. I stayed there, moving around in the bed, crushed by a tremendous guilt of having failed again.

My home was very large and immersed in greenery. My brother and I always played together; We were two pretty serene children. My mother was completely dedicated to us.
She was very young, she had stopped studying, she had given up work to take care of her family.
My dad was always away: either for work, or with friends, or for his hobbies. He was seldom at home and when he was there, the atmosphere changed. Rules, Order, Claims.
Everything became tiring, heavy, it also seemed as if a boulder was crushing me. I never felt alight and this weight was terrible for me: I always felt small and fragile. It was all fake in my house; All tremendously cold, without color, with no soul.
The tiles and the white walls were similar to the dishes. All white, all studied and perfectly in order. My parents were together only for us, actually there was a silent war between them.
I felt guilty and helpless in front of that. I looked at my mother, crushed by the weight of her life and, above all, crushed by the weight of a man who denied her the freedom to live, breathe, and to be herself. I wanted to drag everyone away.
Free. But I felt too small, too fragile. I tried to take my space, my way, my choices. But I messed up myself. I only wanted not to dream again, to not feel crushed.
Finally free. That’s not how it is. Ecstasy, cocaine. I was delighted, it seemed to work. I ran away from my house. When 19, I tried heroine, my inner world was overthrown, annihilated.
The granite boulder became a goose feather that tended to be inconsistent.
Since then, the dream disappeared and the world around me seemed acceptable, livable. But it was all fake; I pretended to choose the life I was shaping.
So I moved out to Florence, carrying on a dual existence: on the one hand I was studying and working and on the other I was a heroin addict, drug dealing to be high, while demonstrating to everyone that everything was fine.
I lived with a guy much older than me and together we had created a brutally perfect world: he, her and myself. Carnivorous, gentle companion of endless void, subordinate curator of all evils: heroine.
But over time, that puzzle began to crumble. I left university, I left my fiancée, I ended up living on the streets, I had destroyed three cars in 1 year.
The people that wanted to hang around with me, were projections of my illnesses, mirrors of the unworthy life that I was conducting. They were drug addicts, ruined like me.

It was raining. During some gray Sunday of February. Three words. I only remember three words. ‘Federico is dead.’ He had been found dead at home.
Overdosed. He was one of the closest friends, I ever had. In the last few years we shared everything.
Except for the last flat. He was gone. It was the first time that I really looked at death; I felt the weight of the end, thinking he’ll never be there any longer. I fell, increasingly, annihilated by my feelings of guilt and failure. I did not help my mother;
I had not saved Federico from death. I had lost all my relationship with my brother and my dad. To my eyes and to those of everyone I was an addict, scornful of life, scornful of my own self, unfit to live the present because incapable of accepting my past.
For Valentina there was no future. On January 28, 2015 I finally chose. I chose to save myself. I chose to start again. I chose to learn how to choose. Now every day is a new day and it is really unique to feel so strongly the need to live …
Sooner or later I know that I will also forgive myself.