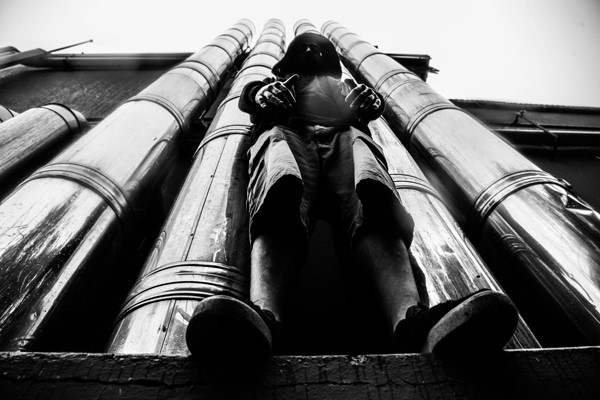 I have a friend who has a problem: he sees himself fat. Well, it’s not just an impression; he’s actually a bit overweight. This creates a whole series of problems that made him struggle to hang around with people and to have a life equal to those of his age. For example, he didn’t want to have anything to do with girls. He didn’t go out with his friends, not that he had many. He couldn’t get passionate about anything; he had no hobbies. He tried to do some sport, but he did not succeed, because of his clumsiness. So every time he had already quitted from the start. There was nothing that he could be passionate about. I tried to explain to him that it was like a dog wagging it’s own tail, but it was useless, he didn’t want to know anything about it.
Then one day something happened at school. I saw him together with a group of ‘bullies’. Those who always mock others, those who spare no one, those being mean when joking and then filming everything to upload on the socials, those who always exaggerate. Increasingly. They competed with each other on this. I was a constant challenge, without reason, without logic. Exasperated.
My friend slid down the stairs on the professor’s desk, tilted upside down. Once arrived to the last step, the desk crashed to the edge slamming him against the wall.
I went to him and told him to stop. I told him that it wasn’t the way to approach someone, who in truth couldn’t care less of him. So he told me to mind my own business, because they were his friends and they accepted him for what he is. I told him that it wasn’t true they didn’t really accept him for who he is, but for what he was doing. He wouldn’t listen to me; my words went straight over his head. He wouldn’t just listen to me. I was really worried of him getting hurt.
Maybe I was wrong. These guys started hanging out with him, picking him up from home, and hanging around in the afternoon and in the evening. I also saw some photos of a birthday party that they had together, of course, with the usual stupid video. One of them jumped in the cake, with the candles lit. My friend was there, smiling. He seemed one of them. He had been hanging around with them for already 2 months, I saw him smiling all the time, he had become a bit slimmer too, though he hadn’t yet become fit. But he seemed as if he was doing fine.
More or less.
One day, I went to see him in the hospital. He had tried to make one of his usual moronic videos: he was on his bicycle, holding onto a bus. He broke a leg. He had been lucky, he could have died. When I came there, I was amazed to see all his crazy friends with him, with chocolates, magazines, books, movies – everything that one would have been pleased to receive. They were waiting for him to wake up. Then they realized.
At that point, inside that room, I felt frustrated. Even I, like them, did not know what to do, what to say. I could not find the right answers to give; I did not know what words to use in order to make him understand what seemed so obvious to me. So I took the phone, called my mother and told her the only thing I could say, “Mom, I need a hand. I have a friend who has a problem.”
In that room we were in ten. We all were fifteen years old. We listened to the advice of my mother, those of the doctor, and then his mom told us off. Yet all those things we already knew. We all knew that those were irresponsible jokes where someone could really get hurt. After all, we all knew it was all an excuse to hang around together, to laugh and to have fun. Although, we had no words to say it. So, instead of talking, or thinking, they simply did what they wanted, I could not make them face the reality. It was just a stupid and simple phrase. But it was just enough for me to have said it, to pull out what I felt inside, to overcome that wall: “Mom, I have a friend who has a problem.”